Our annual spring ride is now bigger and better than ever!

This six full days of dual sport adventure touring will see us riding to and through many landmark locations, including Mike's Sky Ranch, Gonzaga Bay, Coco's Corner, Laguna Hanson, Arroyo Calamajué and more.

Six full days of riding on both coasts and the land in between, making a grand loop of northern Baja.  A fantastic variety of riding terrain awaits you on this tour.  From the cool pine forests of the mountainous  regions of the north... to arrid, cactus strewn deserts, dry sandy lakebeds and arroyos, and best of all... to the beautiful beaches of both the Sea of Cortez and the Pacific ocean. There's even some good ol' Mexican asphalt thrown in for good measure.  This is a fully supported and guided trip. Meals, accommodations (double occupancy), and fuel are provided for you. We take care of everything but your alcoholic beverages.  Here's our itinerary:

Note: Move your cursor onto photos for a description.

We'll rendezvous early for breakfast in San Diego, where if you didn't ride down with us, you'll meet and greet for the first time the GripTwister crew and your fellow riders before crossing the border together in Tecate and obtaining our tourist visas as a group. Then we'll head east a few miles on pavement before turning south onto dirt into the mountains, as we make our way towards Mike's Sky Ranch, the legendary off-roader's oasis perched high in the mountains by a beautiful stream. 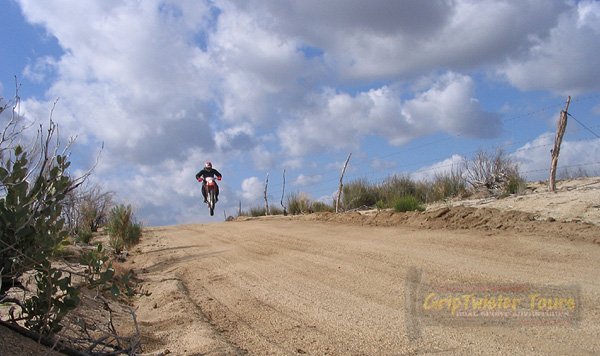 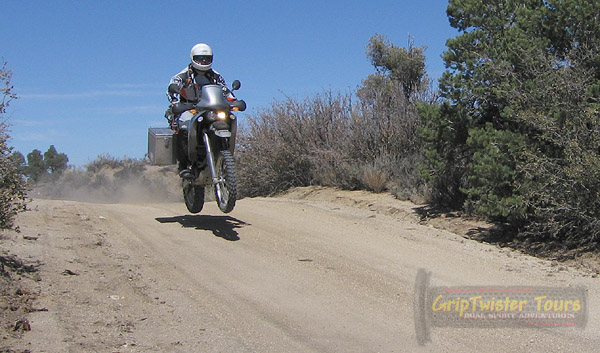 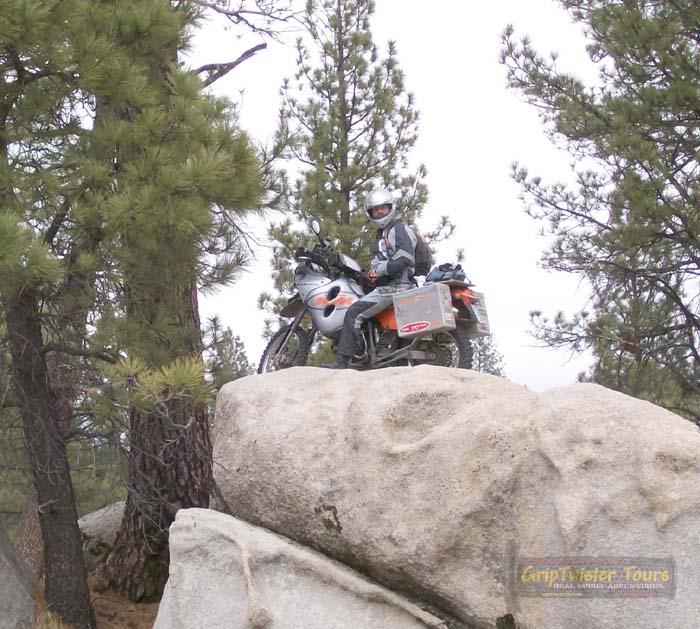 We'll travel through the Constitution National Park, where the high altitude brings cooler temps and beautiful pine forests, then head southeast towards the fertile Valle de Trinidad via tracks frequently used in the SCORE Baja races. After refueling, we'll head up to Mike's on more Baja race course routes. A nice size water crossing marks our arrival at Mike's.
A two-track near Laguna Hanson. 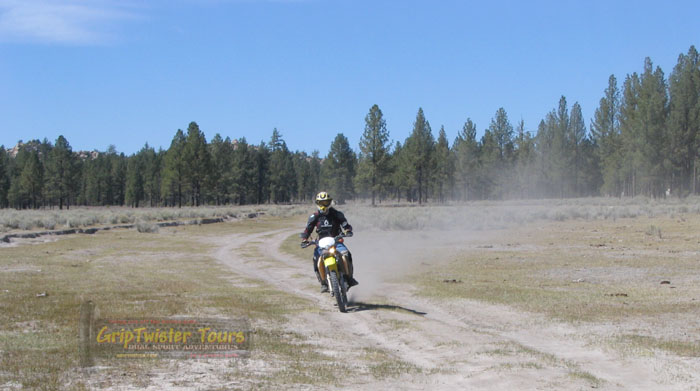 A section of the road into Mike's that's in good shape. 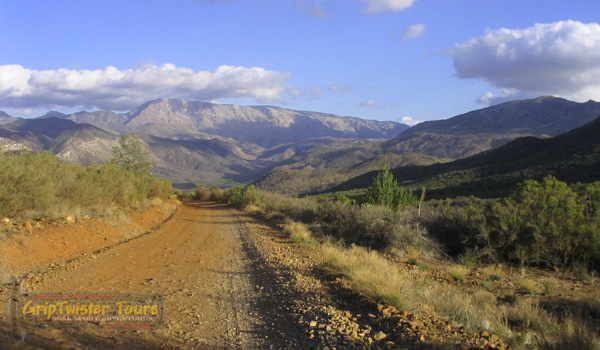 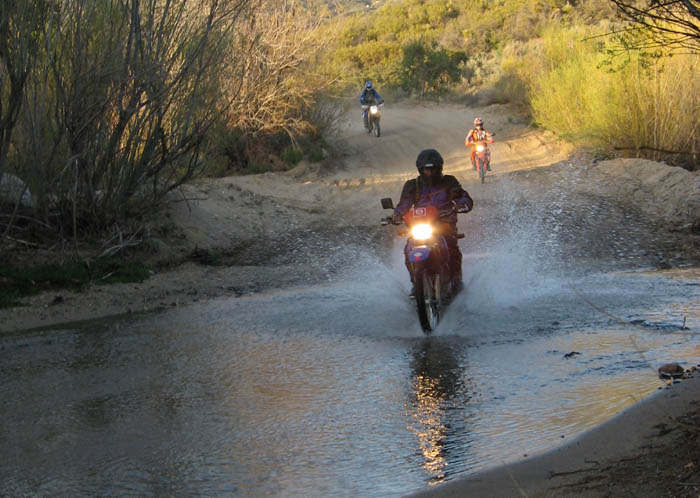 Seemingly in the middle of nowhere, you'll marvel at the swimming pool in the manicured courtyard while dining on a huge BBQ steak dinner, followed by some bench racing with new friends over a drink or two in their unique bar before hitting the sack. 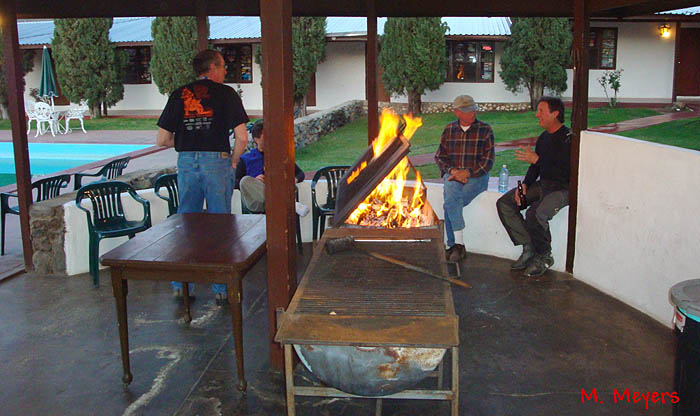 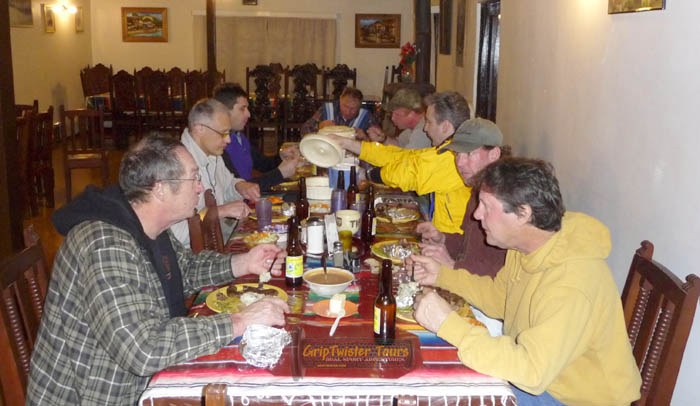 If it's a clear night (and it usually is), you'll want to take some time out to stare up at the beautiful Baja sky for a truly awe inspiring moment.

We'll depart early from Mike's, making our way out the long dirt road to the highway. Time and conditions permitting, a contingent may take the "back way" out of Mike's, rejoining the group at the highway.
A water crossing going out the back way from Mike's. 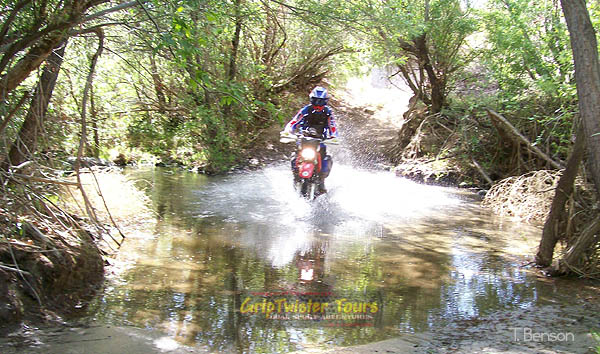 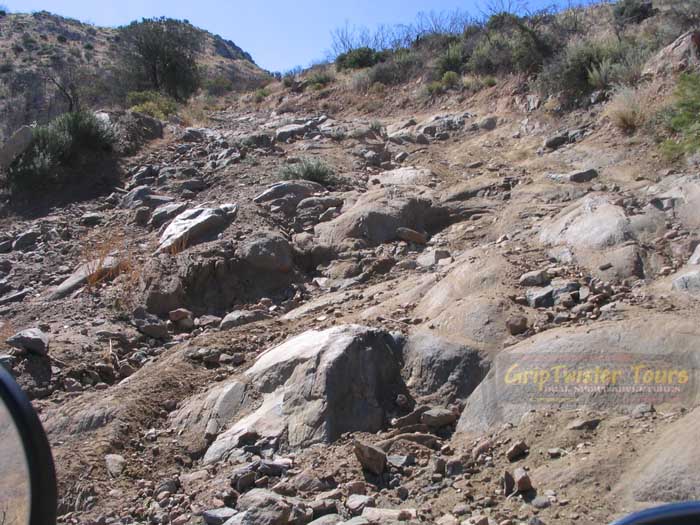 Then we'll head east for the seaside town of San Felipe and the Sea of Cortez. We'll take the "back way" into San Felipe through Laguna Diablo, where you can let your inner "Baja racer" come out to play for a while on the huge dry lakebed. 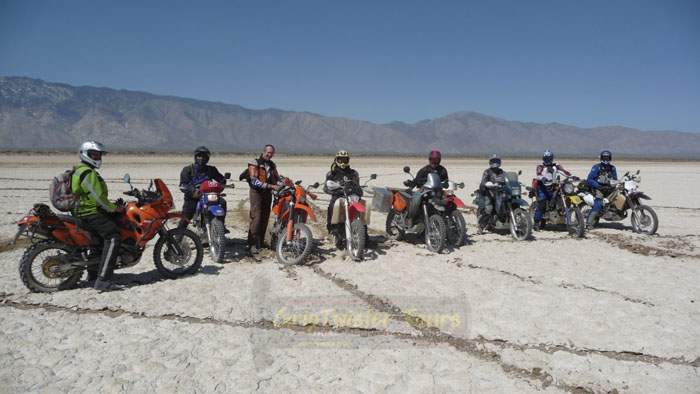 This one is of your guides' bikes on Diablo during an unsupported ride. 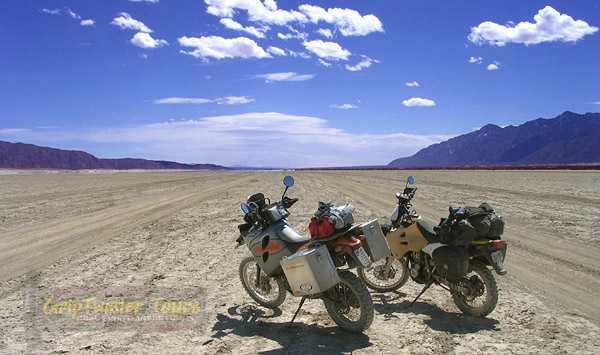 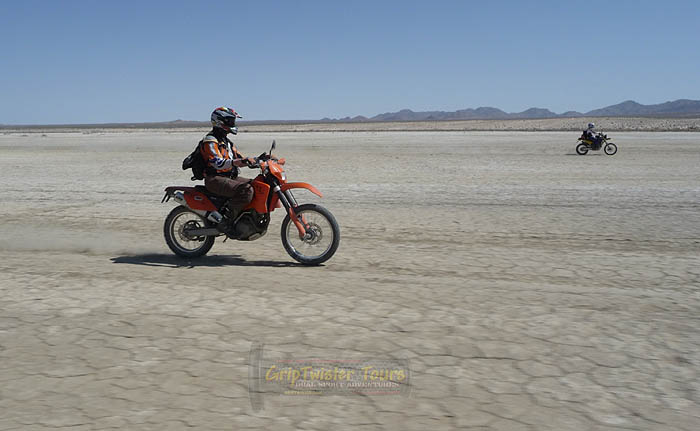 In San Felipe, rapid new land developments have been spurred on by Americans who've discovered that a warm, beachside getaway is available for less than half of what they'd spend in California. We'll gas up and grab lunch at one of it's restaurants on the "malecon", or boardwalk before continuing south. 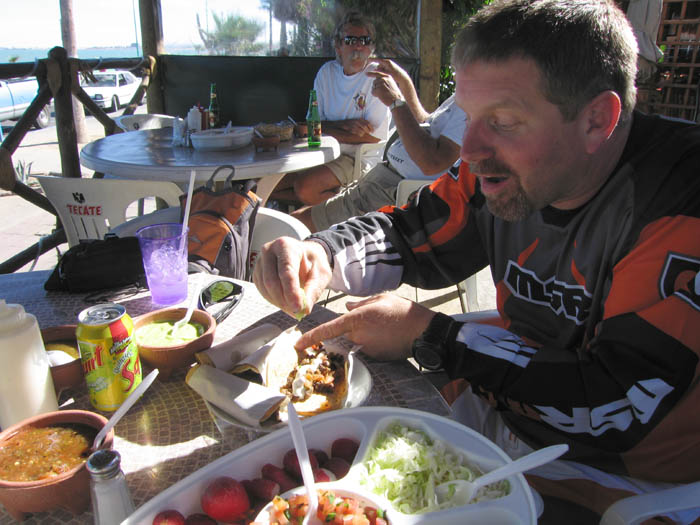 At one time, the road leading to Puertecitos was one of the most horrible paved road in the world, with man eating potholes impossible to avoid, but this stretch has just recently been paved. However, the new "vados", or dips in the roadbed are so steep and abrupt that careful attention must be paid so as not to hit one at high speed unprepared for it. On the other hand, if you are prepared... they can be utilized as motorcycle launching pads! Before too long, the nice new pavement ends just past Puertecitos, a sleepy coastal village many American expatriates call home.

From here to Gonzaga Bay, the road is harsh and winding, with huge rim bending rocks sticking out of the roadbed everywhere and occasional stints of long straightaways with washboard so stiff and tall you'll forget you're on a "highway". You'll realize in quick order that this road was just meant for a motorcycle! 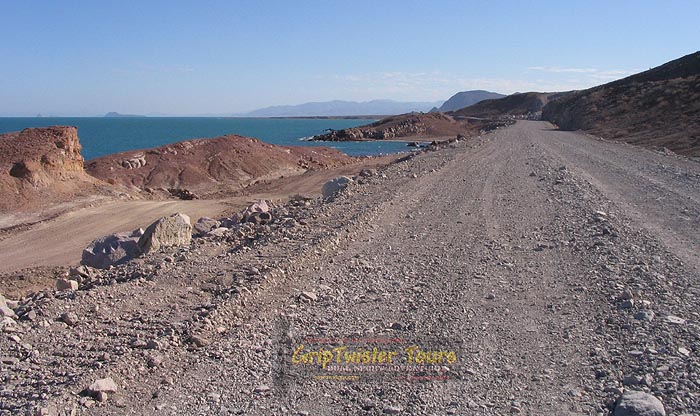 However, the government has undertaken a huge project to pave this route all the way down past Gonzaga bay to where it meets up with paved Highway 1. Kilometer by kilometer, with each passing month a new section of this once rough and tumble "road" is being turned into a scenic route suitable for any vehicle. But for now, we'll enjoy what's left of the old route and take in the views from the new "improved" section, as the views of the Sea of Cortez meeting the desert along this stretch are simply spectacular. When you next return, the dirt sections will likely be just distant, fond memories. 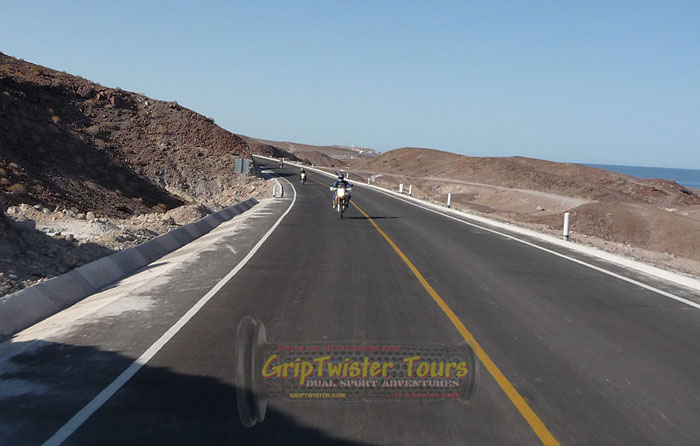 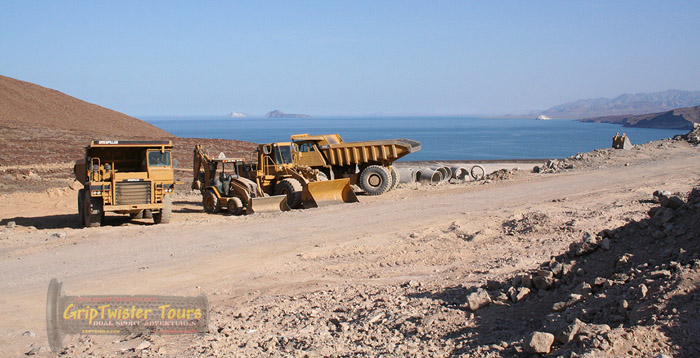 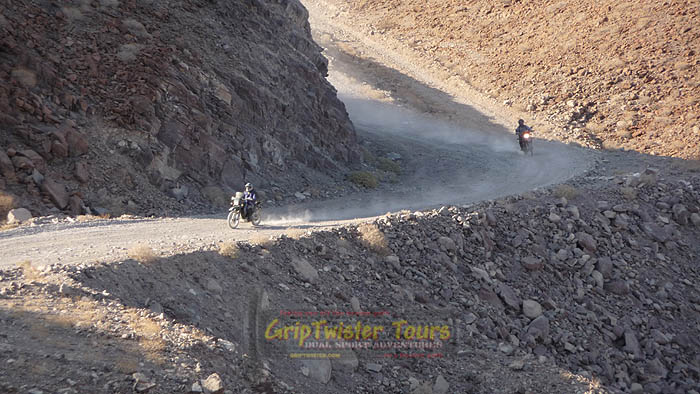 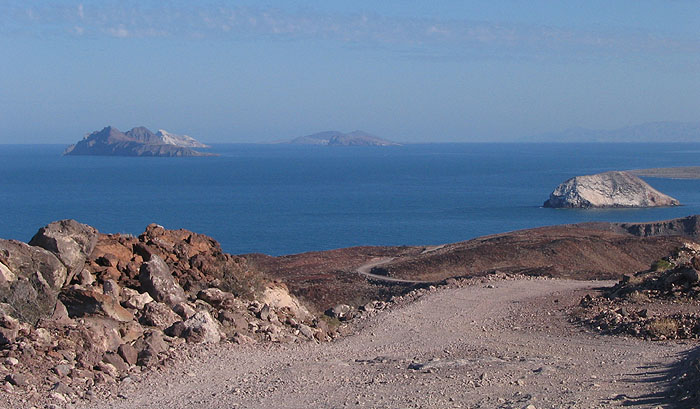 Reaching our destination, we'll enjoy one of the tastiest seafood dinners anywhere in Baja as we look out across beautiful crescent shaped Gonzaga Bay towards Punta Final from Alfonsina's, a fly-in restaurant and motel that's popular with private pilots from the US. 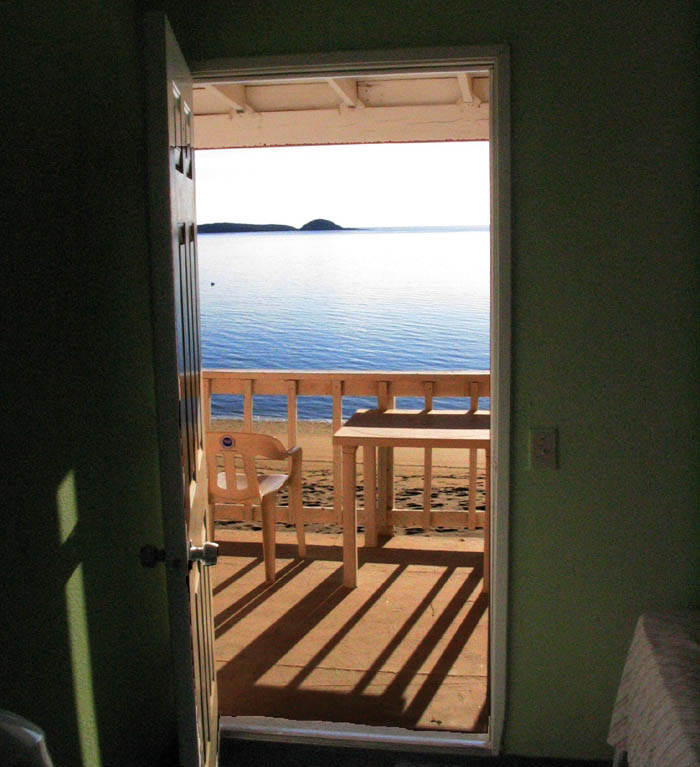 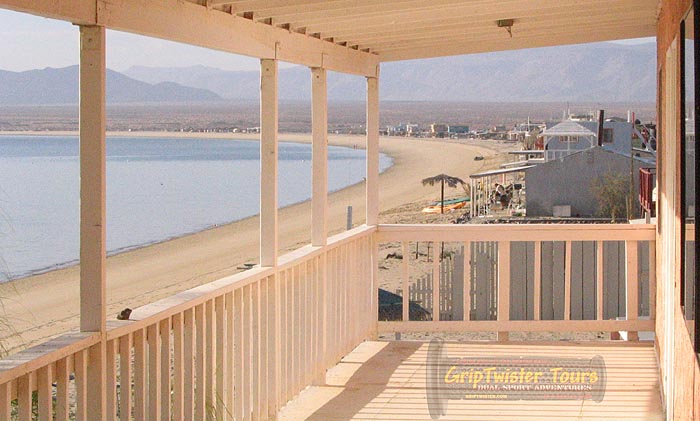 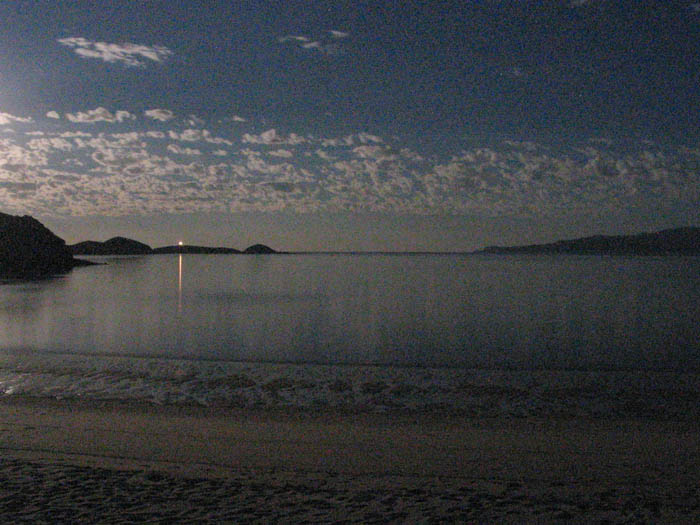 Looking across the bay to Punta Final at sunset.